This image tracks the growth of a romantic network in "Jefferson" high school. The largest component emerges over time, recorded here in weeks. The final end is artifactual, reflecting the end of data collection.

The image tracks annual changes in relations between 1968 and 1999. The image will loop 3 times through the movie, then end with the 1999 image. Current nodes are in red with dark blue relations, past relations are in white and light blue.

1) Add health data, we look at weak ties in the sense that people just had to name each other as friends we saw some connectedness between different groups. 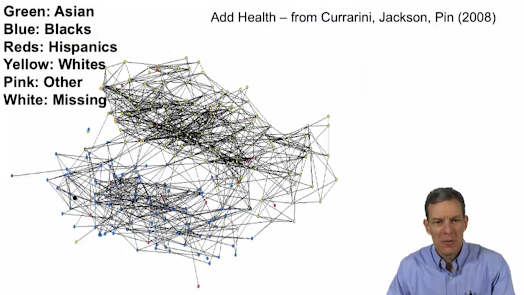 2) If we put in strong ties, those ties that tended to go across, the different groups had now disappeared, largely, and so there's different patterns and so that more of the ties across the races tended to be ones that disappeared once we put in the stronger notion, and the idea is that, you know, bridging, meaning connecting different components of a rgraph. might be more frequently done by weak ties, so even though somebody is somebody you don't interact with much, and you might have less in common with, they might connect to you to a part of the world that you don't normally have access to, and so they can still be very important in accessing information that might not be redundant with people that you often interact with. And so, weak ties can still play a very important role. 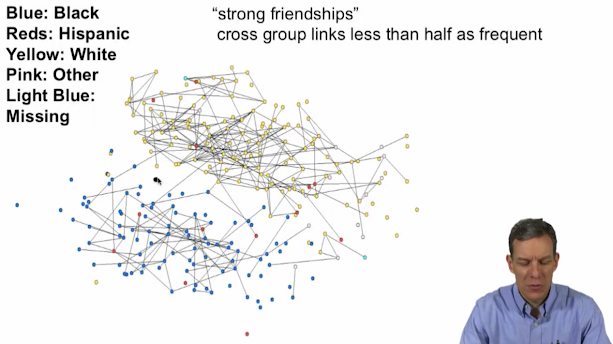