Refinement of pairwise stability, an alternative way of modeling network formation, this is known as pairwise nash stability 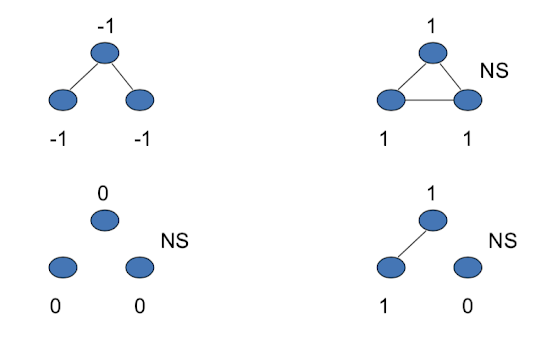 Why is this Nash stable? This is sort of a coordination failure. Nobody manages to name anybody else and nobody thinks anybody is going to name it anybody else. So everybody, each Si is equal to the empty set. Nobody names anybody and now if nobody named me I can't form a link anyway so I might as well name the empty set. This is a Nash equilibrium. These two players are getting one. They don't want to deviate and the third player doesn't make any sense, they're happy. This is a Nash equilibrium, everybody's getting one, there's no better payoff they could get. This one is not and why isn't it? Well this person must be announcing. So if you call this player one, player one must be announcing player two. They could deviate and not announce player two and they would be better off because their pay off would go from minus one to one. So this one is the only one that's not finished. 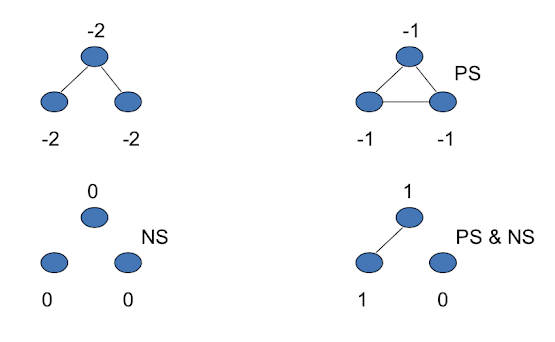 So here's a situation where if everyone is separate they get zero as before. One link leads to payoff of one. Here this situation is one where two links together lead to minus two and three links together lead everyone to a payoff of minus one. So in this setting, when we look at the Nash stable networks, this is slightly different than our previous example. The only ones that are Nash stable are this one and this one. So we've got this one, we still get the problem of a coordination failure, we're getting the Nash stable here. This one is also Nash stable. This is not Nash stable anymore because now somebody could just sever both of their links and get a zero instead of a minus one so they would be better off. And this one's clearly not Nash stable because by severing both links and getting zero they'd be better off as well. So in this situation what we end up with is the only Nash stable networks are the two at the bottom. And when we look at pairwise stability we end up with this one being pairwise stable. Nobody wants to add or delete a link from here, that's clear. That's the maximum possible payoffs that people could get. But this one ends up being pairwise stable as well. And why is that? Well if anybody deleted one of their links, just severed one link, they would end up getting a minus two. So they would end up being at the end of a triangle, they would go to a minus two payoff. And so they don't want to sever a single link even though they could benefit from severing multiple links. So pairwise stability was only looking one link at a time and it didn't allow people to say "Oh look I'd be better off severing two links so Nash stability allows for multiple link changes but then has this coordination failure problem. Pairwise stability one looks one link at a time and so might miss some deviations where you could delete multiple links and be better off. But putting them together in this case we end up with a simple conclusion that seems to sort of be the right network in this setting to expect a form which is the one that's both pairwise stable. So nobody wants to add a link and nobody wants to delete multiple links. And that combination of pairwise Nash stability ends up being more selective than either of the two and in some senses is picking out a more sensible prediction in this particular example. So that's useful to have some refinements of pairwise stability alternative methods of modeling network formation and, you know, it captures these multiple linked changes. You could do all kinds of other variations, you could allow additions of links plus deletions of some links, you can allow larger coalitions. So there's a whole series of different ways in which you can embellish these definitions.