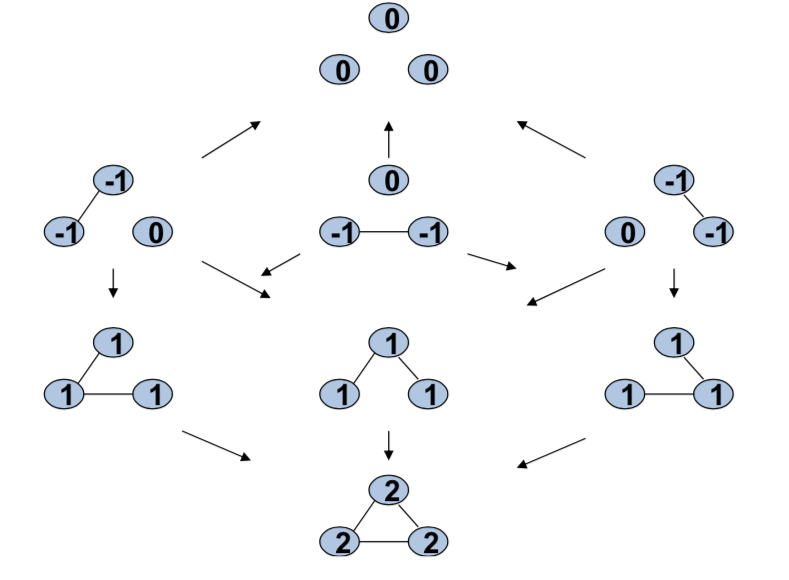 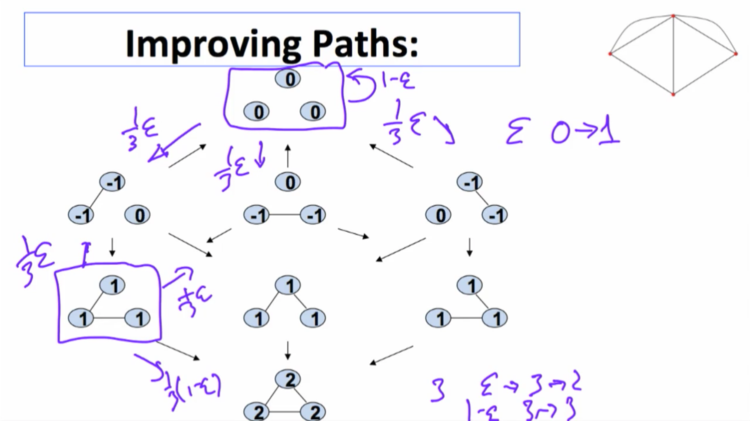 That's a well defined Markov chain. And, given this, you can figure out what's the probability that you're going to stay in every state. So there's a solution of how much time you spend in state zero, how much time will you spend in state one and state two and state three. So what's the average frequency of the number of periods you're going to spend in each one of these things? That's a well defined Markov chain problem. You look for the steady state distribution. In this case it happens to be the left hand side unit eigenvector of this matrix. If you don't remember things on Markov chains or if you haven't seen Markov chains before you can find detailed things on on the internet. Also, I have some pages in my book that just goes through the basics of Markov chains. There is lots of sources where you can find information about this. the important thing is that once we've got this process, it's a well defined dynamic process. 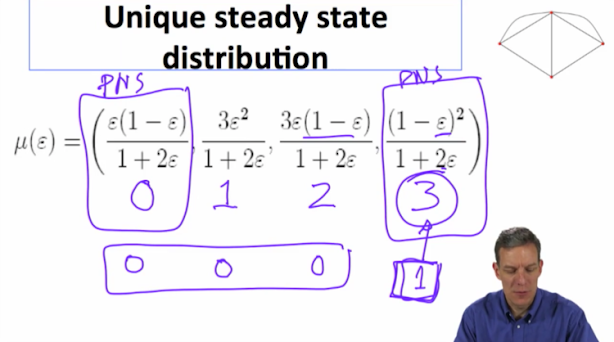 This term ex, approaches zero. This term approaches zero and this term approaches zero. So, this process is going to spend more and more of its time in this three link network over time. So, even though both of these were Pairwise Nash Stable. This dynamic process is going to end up spending, as epsilon becomes very small, most of its time in the three length network. And so you can look at that by looking at the limit of this unique steady state distribution. This is what's known as stochastic stability in the game theory literature. It's a technique of, of refining equilibria that has become quite powerful. and Alison and I used this to, to, to develop methods of, of working through dynamics in, in networks. And here it consists of prediction of which network is going to be visited most often and stayed at for most of the time in this process as epsilon becomes quite small. And one thing to notice is that, as it's placing probability one here in the limit. That's not the same, as the steady states of the limit process. So if you actually look at the process that had zero errors in it, you could have ended up in either the empty network or the full network. So the steady states of the, of the limit process, where you have no noise, is different than the limit of the process with little bits of noise. So the little bits of noise here are very important in making predictions

Limit place probability 1 on the complete network, not the same as the steady states of limit process - which are any with probalility on both the ocmplete and empty 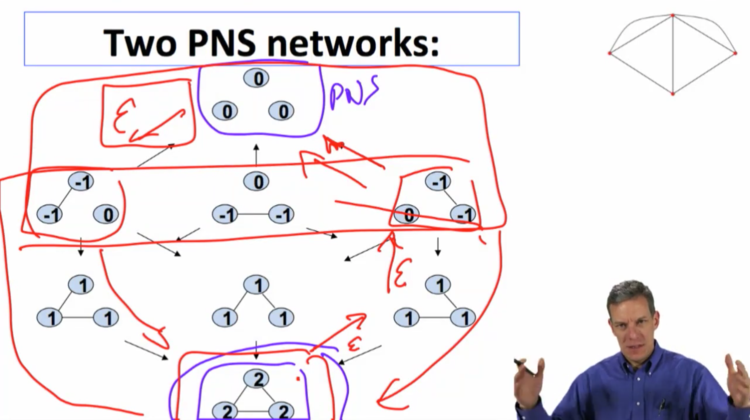 So, if we suppose we're at at the network with three links. Well, we can make an error. If we make an error and bounce to one of these, so there's probably epsilon of that happening. most likely it's going to come back. You would need two errors in order to get to a point where you might get to to the other network, to the empty network, right? So you'd have to, you'd have to make two errors in a row before you could get to a point where you're going to find a network which then naturally sort of has a tendency to lead back to the empty network or the other Pairwise Nash Stable Network. In contrast, one error on this network leads you to something which then leads naturally to the, to this. So when you've got errors, it's much harder in some sense that this stochastic stability notion means this is a more stable, the full network is a more stable network. It's harder to get away from that network. And it's easier to, relatively easier, and it only takes one error to get away from the empty network. And so, what this does is, is it begins to look at what is known as basins of attraction. When you look at these dynamic processes, this one has a larger basin of attraction. If you get to any of these networks, you can get back to this one. To get to this one you really can only get there from, from a smaller set of states. And as, as you begin to look at this, this process more naturally gives you a complete network than a smaller one. So, this is a powerful tool for looking at dynamics. you can simulate these things so once, you know, this we can solve for explicitly with, with only three, three nodes. And relatively small number of, of networks. As you begin to enrich these kinds of processes, they're going to get more complicated, but you can begin to analyze them by simulation. So the