Okay, so we've got some basic ideas behind strategic formation. And now, we're going to talk about modeling how we measure efficiency and also how we can model people's decisions form and delete links. And so, in terms of modelling incentives and you know, just sort of keeping track of these things, let me just first make a very simple point. so let's think of a world where we need consensus to form links. So, two individuals have to agree to be friends, and I can't form a friendship with somebody else if they don't agree to be friends with me. Now one way people might think of doing, of modeling this would be as just modeling it as a game. And the simplest possible game you can imagine is everybody just announces who they want to be friends with. And then if both people, if two people both announce each other, then we form a friendship between them, and if they don't both announce each other, then we don't form a friendship

Nash equilibrium would be a situation where nobody wants to change their list of announcements given the set of announcements of other individuals. And so, let's just talk through why that is doesn't really work so well as a model of network formation in these kinds of settings. And imagine that we're in a setting where they're just two individuals. And if they're separate, they get a value of 0, and if they're connected, they get a value of 1. Now we have a game where they beat, they simultaneously announce whether they're willing to form their relationship. well both of these are Nash equilibria.

In this case it's a situation where if I don't think the other person's going to announce me, that doesn't matter what I do, I can't get the friendship anyway, so I might as well not announce it. So, there's an equilibrium where neither person announces the other, because they can't you know, add or really change things. There is also an equilibrium where both of them announce the friendship and then it firms. And so there is two nash equilibria and in this case that's somewhat problematic as a model here. Because this is the simplest possible model and it predicts anything it could happen in terms of linking to forming or not forming. And yet, any reasonable, communication among these individuals should lead to this link for me. Now there are ways of dealing with this in terms of the Game Theory. We can put in stronger solutions concepts and trying to do things that way, so instead of looking at Nash equilibrium we can allow for slight errors by players and see what happens. Or, but there are other examples that aren't quite as simple as this one which give other solution concepts trouble. So what we're going to do is instead of using off the shelf non cooperative gain theory, we're going to model incentives using a very simple concept which we'll call pairwise stability. So the idea here is simple. What we'll do is we'll look at a network and we'll say that it is stable.

Just dyad(1-1) is pairwise stable, so both people would gain by adding this pairwise ability just says that this is the only stable network. 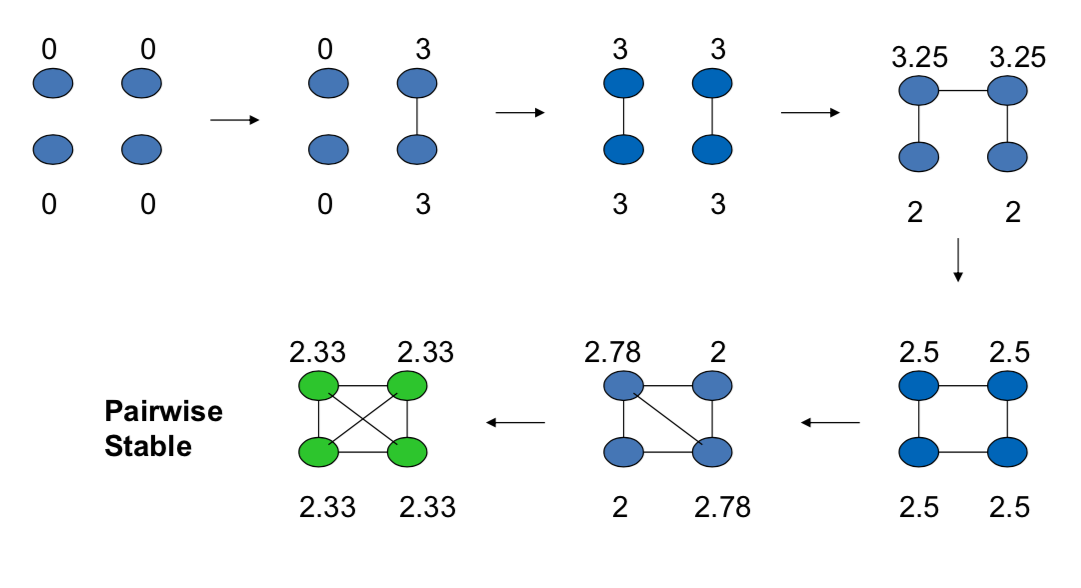 So, we'll just normalize payoffs with no connections to zero. Let's suppose that if you form a relationship with one other person, you get a value of three each. So, if two people form a dyad, they get a value of three. So, if both sets of people formed relationships and we have three to four people and we have two relationships, and everybody gets a three. if, if we add a link to this network where these two individuals now decide to form a link together, then their payoffs go up so now they have two relationships each. They get a marginal benefit, a bit little more, they get 3.25. But lets suppose these people are jealous, they don't like their friends to have new friends. So this is different then the connections model this is a situation where now I'm, I'm losing time with my friend because now their spending more time with somebody else so they get a value of two. now these people if they connect to each other, they get more value. But then these people are losing value because now their friends are spending time with other individuals. So we can think of this, this will come out of a collaboration network where if people I'm collaborating with are collaborating with other people, then that means we spend less time together, I get less value... So this is one where we've got negative impact of other people forming new relationships. And so you can go through and, and have different paths here, and here, you know, when these people now form a relationship, their value goes from 2.5 up to 2.78. But these people are, go down from 2.5 to 2, so they, they're losing more time[INAUDIBLE] and so forth. And then these people form a relationship. They go up from the 2 to 2.3. And so forth. Okay, so this is a very simple setting. And what we see in this setting. In terms of the, value. the arrows represent. Moves from one network to another network. Which would be improving, or it would sort of means that this, this network is not stable because the individuals here would gain by adding a link, and then this one's not stable, and this one's not stable, right? So each one of these is pointing to a new one, and we end up with the only pairwise stable network for this set of payoffs. You, given all the permutations of these things you're going to end up with everyone connected and everyone getting 2.33, okay. So, that's the pairwise stable network in this set. Okay. Now the interesting thing is well, they, they're getting, they're worse off than they would have been had they stopped here. The difficulty is, this is not stable in the sense of individual incentives. People who have incentives can move on from there. 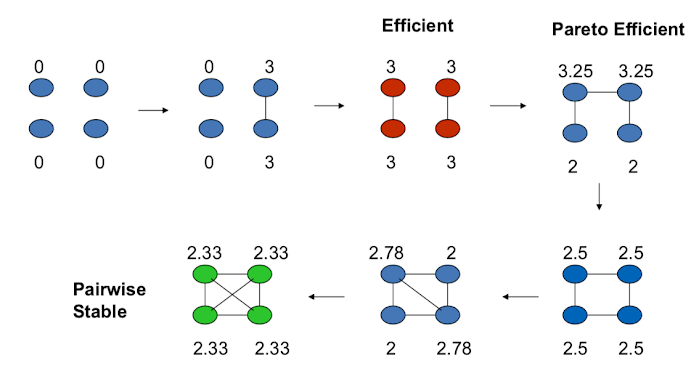