it's what's known as the Coauthor model. And it's a very simple, another simple variation on, on something you can imagine generating value for individuals. And here people are going to be involved in research collaborations. And the value from each relationship depends on how much time people put into those relationships. And we also get an interaction term which is going to capture the some sort of synergies. That if I spend more time collaborating with somebody, we have more time to brainstorm, get better ideas, and that's going to be valuable. So, in particular, what we do is look at all the friends that a given individual has in a network, so look at all the ij's. And what is a given individual get for each relationship in a network? Well, they get one over their degrees. So, if I have four people that I'm involved with, I spend one fourth of my time with each of them. So, for each one of them, I, I sum up one over my degree, okay, so I split my time. I also get a fraction of their time, so they're putting something into it. If somebody is, that I'm linked to has five relationships, then I get one fifth from them.

And then the value of this interaction term, this synergy is coming, is proportional to 1 over di times 1 over dj. So, if I spend all of my time with somebody, I'm going to get more synergy than if I spend one quarter of my time with somebody, then I only get one quarter of the synergy. And I get something proportional to how much they, time they put into the relationship. So, the more they drop it, the less productive it is. So, this is going to be maximized when we limit these things to one, and then when we put them as two, three, four and so forth, the value of the synergy is going to decrease, okay? So, if you add these things up, then what do you get? You get a value here which just the, the sum of 1 over di is, is going to come out to be a 1. So, basically what I'm getting is, I look across my coauthors, I get one fraction of their time. And then the synergy term, which is going to be proportional to how much time invest in different things. Okay. So, that's a very simple value. here we didn't, we, we, the benefits, the costs are implicit in this model. We're not going to put in explicit c's or costs to links. The costs from adding extra links come from the fact that you're diluting your synergies with different collaborations. so here, you're just spreading your time out and the more thinly you spread your time the lower the value from any relationship you get, okay? 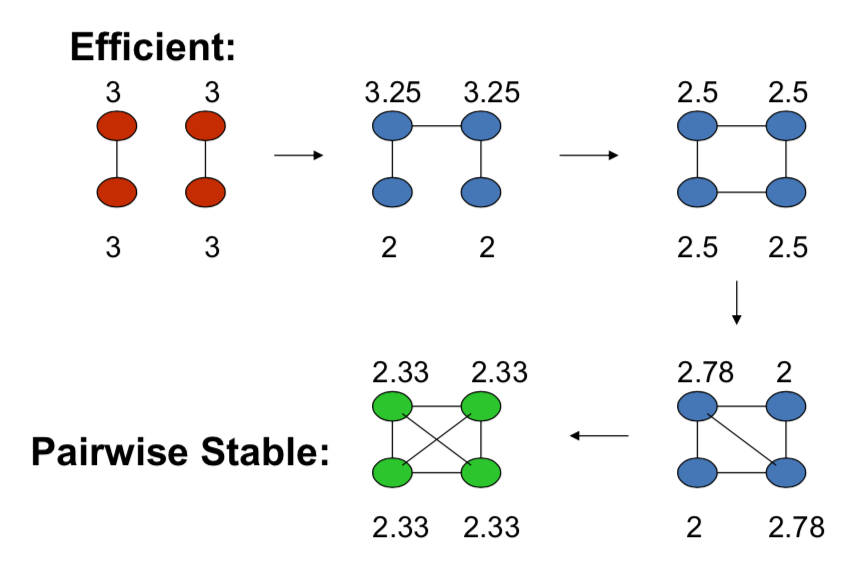 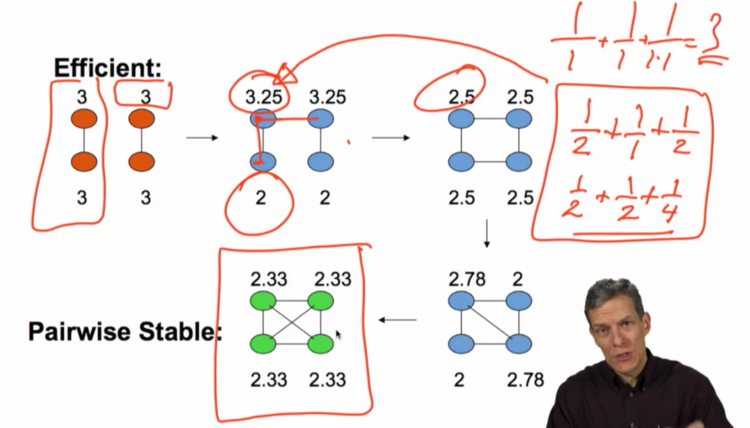 Stable and Efficient only coincide in special cases¶