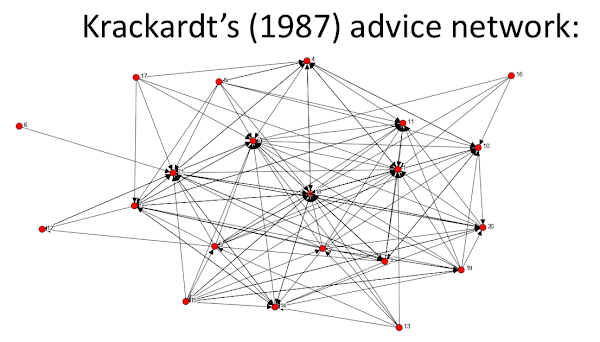 In this situation, so it's not a strongly connected network. Nonetheless, the S is still going to work as the the right answer to this. so if you go through and figure out what the S is. So if you solve for the S of this, there are some individuals, for instance 6 who didn't get listened to and 13 and so forth, end up with 16 and 17, so some people end up with no influence, nobody listens to them and comes to them for advice. but basically we end up with the advice levels varying from 0 up to let's see, we've got a 0.2 here. so we end up with different levels of influence.

And what the other columns in this table represent is sort of, these are levels of the individuals in a hierarchy in this company. so level one, this is the CEO, the head of the company. Level two, we've got people at the second highest management level. Then level three, is the third-highest level. And what we see is actually there's some people that are more influential in terms of this network than the, the individual at the top, actually one of the people at level two has a higher influence vector than the person at the top.

And we can begin to look at different people, different people in, at, at level three have different levels of influence. And you know, you can look at that by the different department, their age, their tenure, and so forth. And this information is going to be complimentary to some of those things that doesn't just necessarily correlate with how old they are or how long they have been in the company or which department they're in. These numbers are telling you something different about the, the relative influence of these individuals have.

so what that does is it just shows, you know, one example of where you can begin to take this DeGroot model. It gives us a foundation for looking at this particular left-hand side unit eigenvector as a, a measure of influence. And you know, if you ran the DeGroot process on this particular network. And had people updating over time in their beliefs, that would tell you what their beliefs would eventually converge to. And this was done under the assumption that so we don't know exactly what these weights are. That people put equal weights on each one of their friends that they set. So person 17, for instance has you know five out arrows. So they put 1 5th weight on each one of those.