what's important in terms of having a complete lattice is that when you take any set of objects. In this case, what we're going to be looking at is a set of equilibra. But when you take any set of these, so let's think of these as x'. So in our world what are we going to be thinking of as the space? we can think of the action, so suppose that we have 6 individuals connected in a network. we can think of them as playing all 0:

one possibility is that they play all 1:

we'll say that one vector is bigger than another if all of its entries are at least as big as the other.

neither one is bigger than the other:

Why is that going to be useful? Let's think of our equilibrium structure, so our six objects of 0 and 1 are 6 dimensions of 0 and 1 in term of equilibira. So in the game where we had that people wanted to do something if at least 2 of their neighbors did.

there's in some sense a biggest equilibrium, everybody taking 1(upper right), there's a minimal equilibrium, a smallest one, everybody taking action 0(lower left). So if we take this set(upper left and lower right) so be our set X, there exists something else, which is at least as large as either of these where every entry here is at least as large as every entry in here. 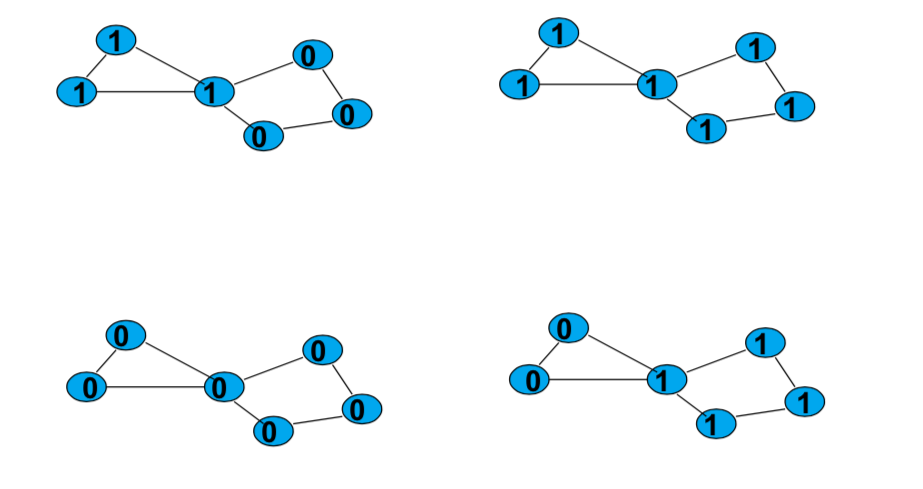 If in a game of strategic completements where the individual strategy sets are complete lattices:

the set of pure strategy equilibria are a (noneempty) complete lattice.

So this is a theorem which follows fairly directly out of standard game theory. But what it does is it says that when we're looking for equilibria, there's going to be a nice mathematical shape to these things, and the complete lattice is a nice object to work with. And what that also tells us is that directly, in games of complements, there exists an equilibrium as corollary to this, there always existed pure strategy equilibria because complete lattices have to be nonempty, so that's something that comes for free.

That also means there's going to be nice ways of finding these equilibria: so suppose that we've got a world where we're dealing with strategic complements and people could take action 0 or 1, and we want to find the highest equilibrium possible. So what could we possiblely do? So let's supppose that there's a society, and we start with that society. there's, say, 7 individuals:

So now we just go back and repeat this. Now see if anybody else wants to take action 0. Now that we've put this person in action 0, either this is in equilibrium, or maybe now somebody says, well, given that the last person is taking action 0, now I want to take action 0. And if that's the case, maybe this person says, now I'm going to go to a 0.

While given that this person was always a 0, then this person's always going to be a 0, this same kind of logic. They're never going to move back up because it's a game of strategic complements, we know that this person always has to be 0 and so forth. And we just keep following this. And either eventually we stop at an equilibrium or we reach all 0's. And if we reach all 0's, then that has to be equilibria. So now there's a very simple algorithm that takes at most n steps to find an equilibrium. So in a game of strategic complements, there exists an equilibrium, they form lattices, they're very easy to find. So this is a wonderful structure of these games.

Equilibria generally will not form a lattice structure, unless you're in a very trivial case. Equilibria will not form a lattice and generally you're going to have problems, because when one person wants to take action 1 and other people go to 0 and vice versa. So you get this flipping condition rather then conditions where everybody goes up or everybody goes down. So the fact that everybody's preferences are moving in the same direction gives us the nice structure and complements. But the substitutes means that when we change one person from 1 to 0, other people can flip, and then things can flip back and forth and it's going to be very hard to find equilibrium in a lot of these games. So games of strategic substitutes are going to be more difficult to deal with, more difficult to say things about than games of strategic complements where there's this nice structure and mathematical structure to the equilibria.

So for instance, when we look at the best shot public goods game, we can sort of, as we flip, given an individual on or off, that's going to affect what's happening. And we get this person doing a 1, this person doing a 0 or vice versa, but we're not going to be able to order these things. So we can't have them, there's not going to be a better equilibrium or a lower one. And actually finding these things, finding all the independent sets can be quite difficult. Finding one maximal independent set in a best shot public goods game is not hard. Finding all of them can be very difficult. And, in fact, is a difficult computational problem as known in computer science. But there can exist multiple equilibria and no lattice structure.

A little bit more about generally, so best shot public goods are going to be one of the cases in the public goods case where we can actually say something about finding them. So let's suppose you wanted to find one equilibrium, say find one maximal independent set. Well, there's one algorithm that's fairly easy. One possibility is I just pick some node and I make that a 1. So I'm going to say this person is definitely got 1, and I'm going to have them choose the action.

Now if you did that over every possible ordering that you could pick nodes and you can find all the maximum independent sets. The difficulty is that there's many possible orderings I could have done that in, right? So you've got n factorial, you've got a huge number of possible orderings you could think of in sort of running that algorithm. And so the difficulty in finding all the maximum independent sets is going to be much more difficult. And it's going to be very hard even to find the best one in terms of having most or fewest actions. Whereas that was easier in a game of complements, where we could find a very quick and simple algorithm for finding equilibria. So complements, nice structure. Substitutes, there's also nice structure in terms of payoffs but not as nice structure in terms of equilibrium.

Nonetheless, these are interesting games to look at, and both classes will be interesting in terms of applications.