So, we've been talking about games on networks and now what we're going to do is sort of wrap things back and in particular we'll be looking at a very per special application in order to talk about this that a favor exchange. But the idea here is going to be to understand the co-determination of network structure and behavior. So the network structure affects what behavior goes on, but the behavior actually affects what the link structure looks like. And so here, when we talk about favor exchange, the links are actually going to be defined by the fact that people are, are trading favors. And so the behavior and the, the network structure are, are going to be determined in one equilibrium notion together. 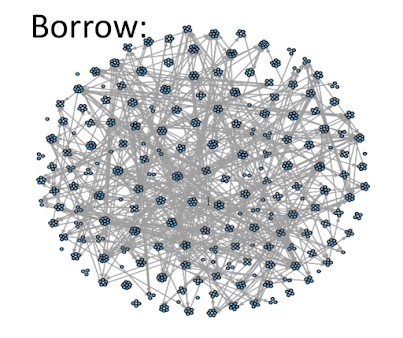 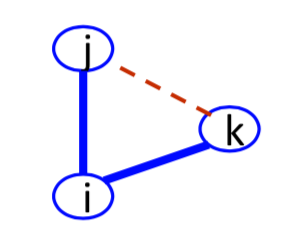 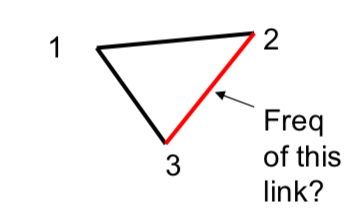 so what we're going to do here is actually explicitly model favor exchange, and then look at those networks and try and understand what will come out, what, what's the predicted structure, according to the model? And then does that relate to clustering, does it relate to something else, what, what kind of sense can we make of things? We're going to work with a really simple model. you can enrich this substantially and, and we actually do in the paper we wrote, so there's a much richer version of the model there

Ostracize agent who does not perform a favor 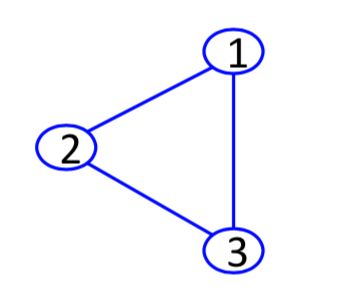 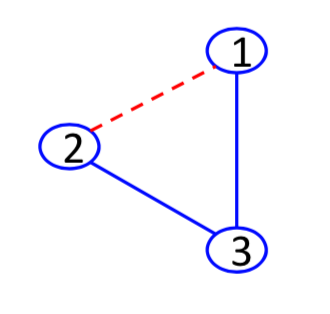 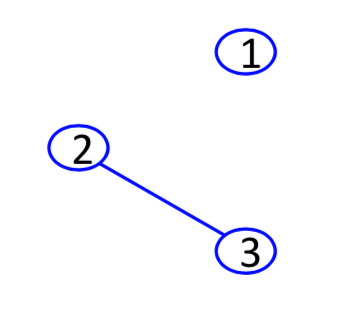 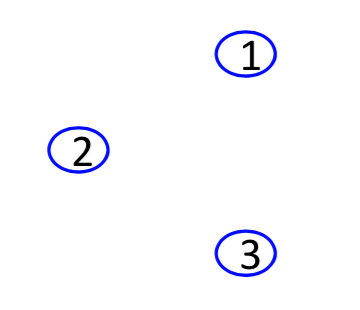 what's the value of putting this in a network? But the value of putting this in a network is sometimes, these favors can be quite costly. So it could be that somebody has a crop failure, and I have to run them a lot of money, or you know, do, give them a lot of help. in that situation, to do, what's, what's the incentive to provide the favor? Well, if we're in a social network, then it can be that the value of providing a favor is increased by the fact that instead of losing just one friendship, if I don't behave well and, and follow the, you know, keep providing favors when I'm asked, I could lose multiple friendships. So let's look at a situation where we have three people in a triad here and what we do is ostracize anybody who does not perform a favor. So if anybody's called on to do a favor and they say no, then both friendships are, are severed there. So in this case Now, the cost only has to be less than two times this value of a virtual friend, friendship. So it's easier to satisfy this relationship, or this, incentive constraint now because the value is, is, increased in terms of how many friendships I might lose. In the future, I could be ostracized by both of the other agents. So in this case if one is called on to do a favor for two if one doesn't do the favor for two, one loses two friendships and therefore this incentive constraint is that the cost only has to be less than two times the value of the friendships. Now, of course in this situation, once that really, these two relationships are, are gone then it could be also that two and three are no longer going to be able to do favors for each other, because if they couldn't satisfy, if c was greater than 1 times this, then they're no longer going to be able to sustain favor exchange. So, in this case, the whole triangle would collapse because once one is ostracized, and two and three no longer have enough of an incentive on a bilateral basis to keep the friendship going and, and so the whole thing collapses, and so this whole triangle disintegrates.

so then we can ask which networks will be equilibrium networks if we look at this process, over time. So let, let's take a quick peek, at, two different networks that could be sustained in equilibrium in situations where two -- losing two friendships is, is bigger than the cost of doing a favor. But the cost of doing a favor is bigger than the value of one relationship. So you need two to, the, two friendships lost to, to give incentives. So we've got two different networks here, which are both going to support favor exchange. And the idea is basically going to be that if somebody doesn't perform a favor they're going to lose two friendships instead of just one. 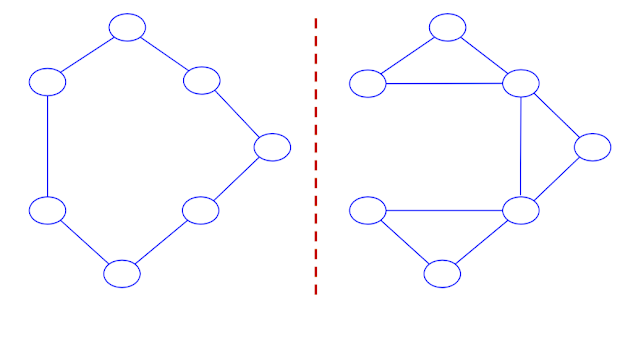 so imagine, for instance, that this person one, here, is called on to do a favor for person, say, two, right? So we could do it in either of these two different ways. 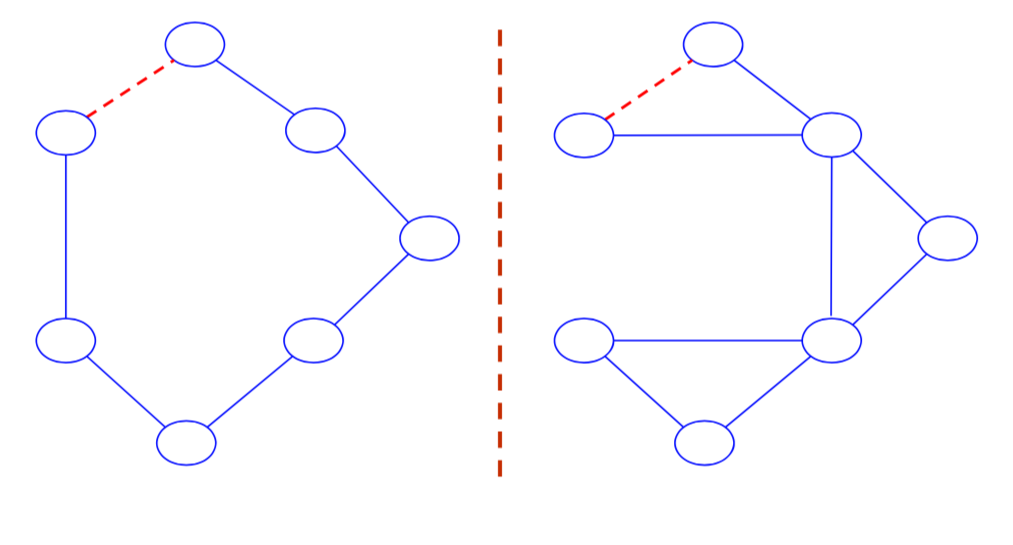 Now if they fail to perform that favor they are going to actually be losing two different relationships not just one and that's what is keeping them making sure they provide the favor but then we can look at this, what's the subsequent implications of the fact that we've lost this now, okay? So if we look at this, now these two individuals, this person for instance can't be trusted anymore because they only have 1 friendship left. So the next time they're called on to do a favor they're not going to do a favor, so effectively, this relationship is going to have to disappear because it's not enough, to, it can't maintain itself any longer. Similarly this one's going to have to disappear, right? This person can't be trusted. And this one, and so forth, right? 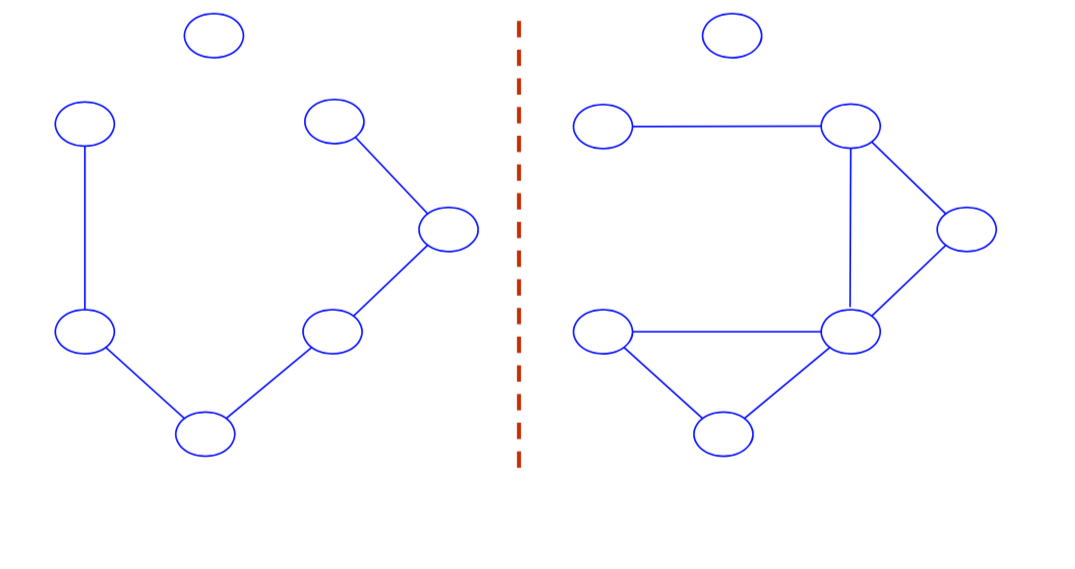 So what we end up with, is effectively, those disappearing, and then over here, we can see that that's going to have further implications, right? We're going to have other relationships which are no longer sustainable given that we've lost part of our network.

so in this setting we have a widespread contagion, so that the fact that this person did not perform a favor, ended up having consequences for people who are actually quite far away in the network. And it reached somebody that was at, you know, the distance 3 away from them in terms of the network. In this situation it stopped right here. Effectively this part was lost, but then the rest of the network. is maintained, right? 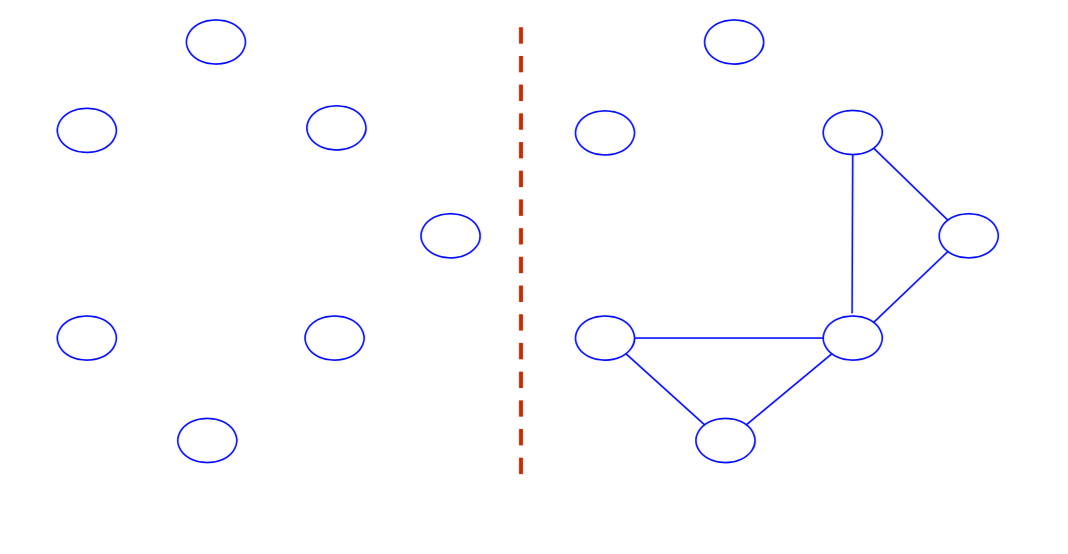 Impact of a deletion/perturbation is local

To say that a network will be robust if the failure to perform a favor only impacts the direct neighbors of the original players who, who did not perform or, or lost links. So we don't have a widespread contagion. It's only people who are actually directly connected to that individual originally who are going to end up losing relationships. So the impact of some sort of deletion or perturbation is local. 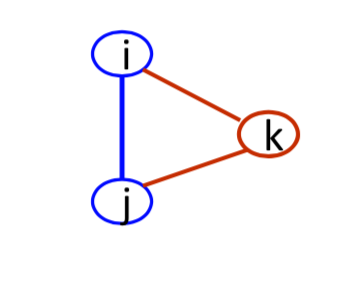 Thm: Implications of the game¶

If no pair of palyers could sustain favor exchange in isolation and a network is robust, then all of its links are supported 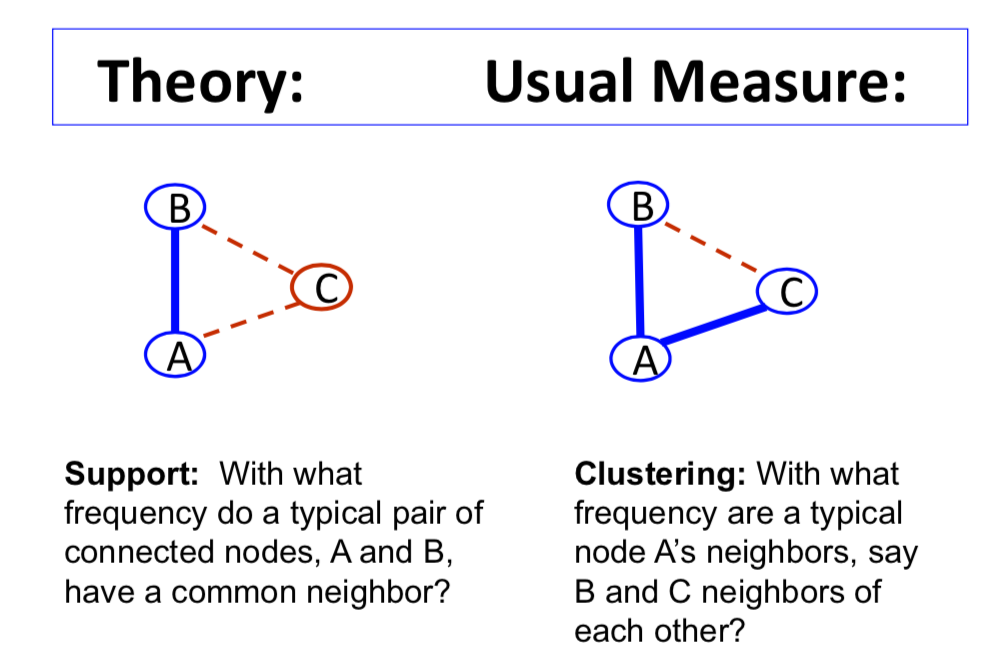 And so, for instance, you know, here's a network where every single link is supported. So, every time you look at a link, there's a friend in common, but the clustering in this network is only less than 50%, because there's a number of individuals for instance, this individual, who has friends who don't know each other, right? So there's one, two, and three two and three are not connected so the clustering is going to be lower. Okay? And so basically what this says is we ought to see high support. That's what the theory says. But it it provided that favors are costly enough then you should see high support. So a joint hypothesis. 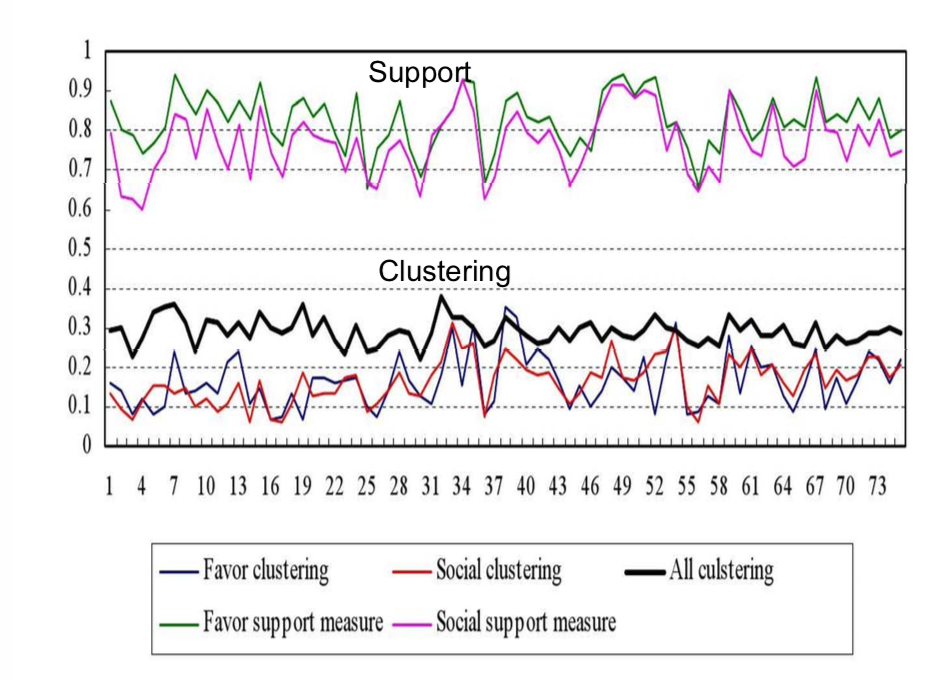 if we go back to our Indian data, and we actually look at the fraction of links that are supported. So here we've got 75 villages, so these are villages, and we have different kinds of networks we can look at. So the ones that explicitly involve borrowing kerosene or rice and so forth. Those are the green line. ones where you just have friends coming over for, for dinner or, you know, friends coming to your house etc. that is the, the lower line here. and then we can compare to what the clustering rates are and the clustering rates here vary depending on which networks you're looking at. But, you know, basically somewhere between, five and 35 percent, and here you're, you're going basically from 60 to 95 percent. So, support is, is quite high here. many of the links are supported, and the clustering coefficients are higher than at random, but actually much lower than the, the support number. 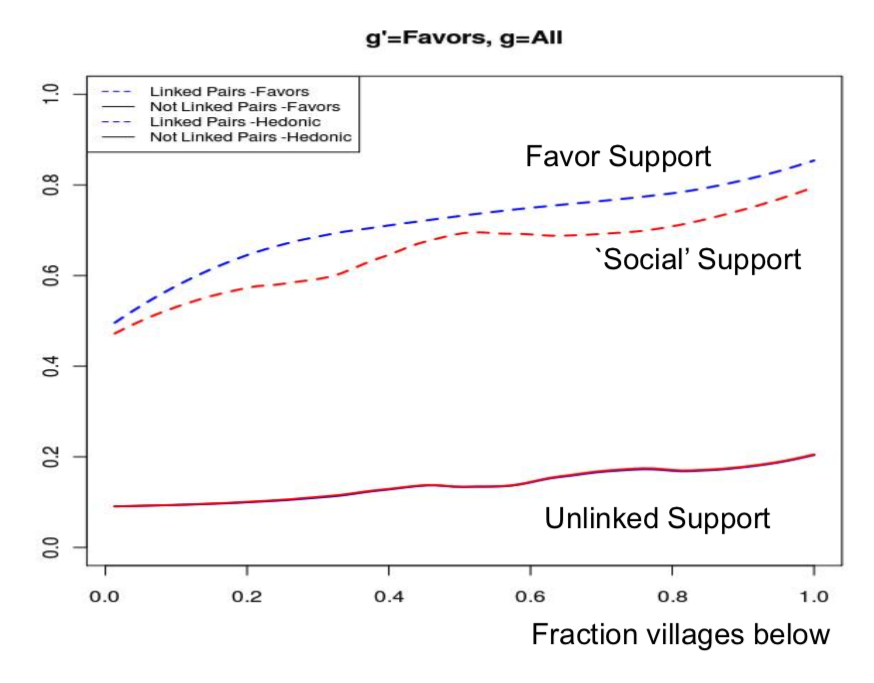 if you look at one measure, one thing we can make sure of is, maybe the support is just coming up at random, and so you know the, the network gets dense enough so that every time you look at a link it's likely to have a two-pathed friend in common. And so, we could actually ask you know, when we look at links where favors are exchanged, borrowing lending kerosene, rice, or money etc. We look at that, then we can look at what's the rate of support across the different villages. So, a fraction of villages that have at least that level or below that level. and then we can look at unlinked support. So suppose that we're not doing that? What's the chance that we have a friend in common? So things were just happening because of the density of the network, then unlinked support would be high. And you actually correct this for observable characteristics and you know, figuring exponential random graph models and test it, and so forth, and you'll get similar results. Basically the support is much higher than would be just at random, so it's not occurring from that level. you're, you're seeing this for some other reason. 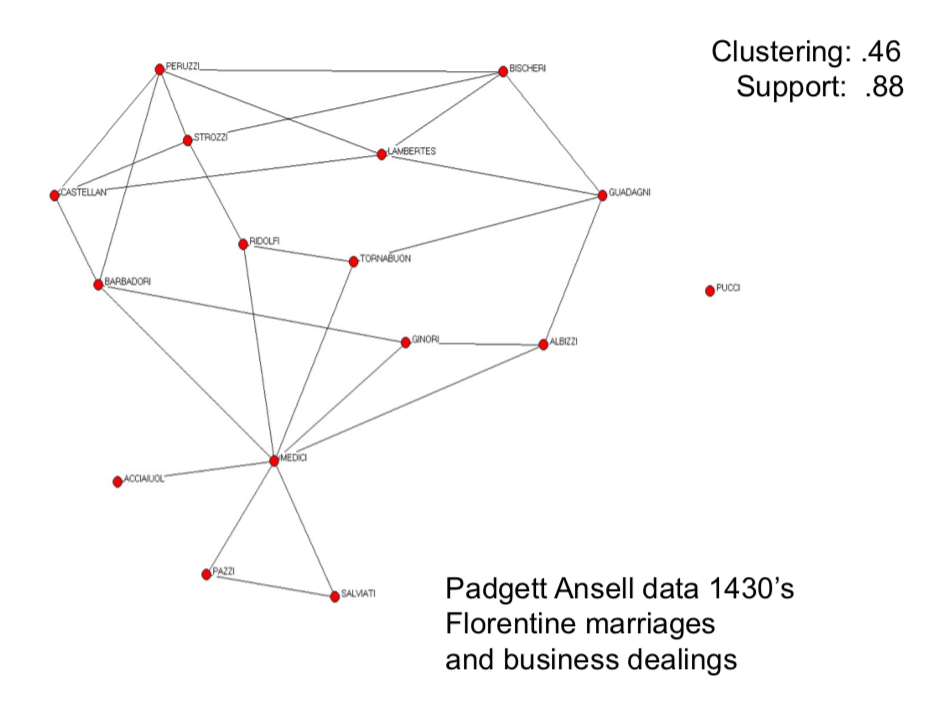 Just to take a quick look at another set of data that, that where we can test for support. so this is again the Florentine marriage data by Padgett and Ansell and when we look at those data what do we see? here we see clustering at about 46% support at about 88%. And so here, this is the, both the marriages and business dealings among these families. 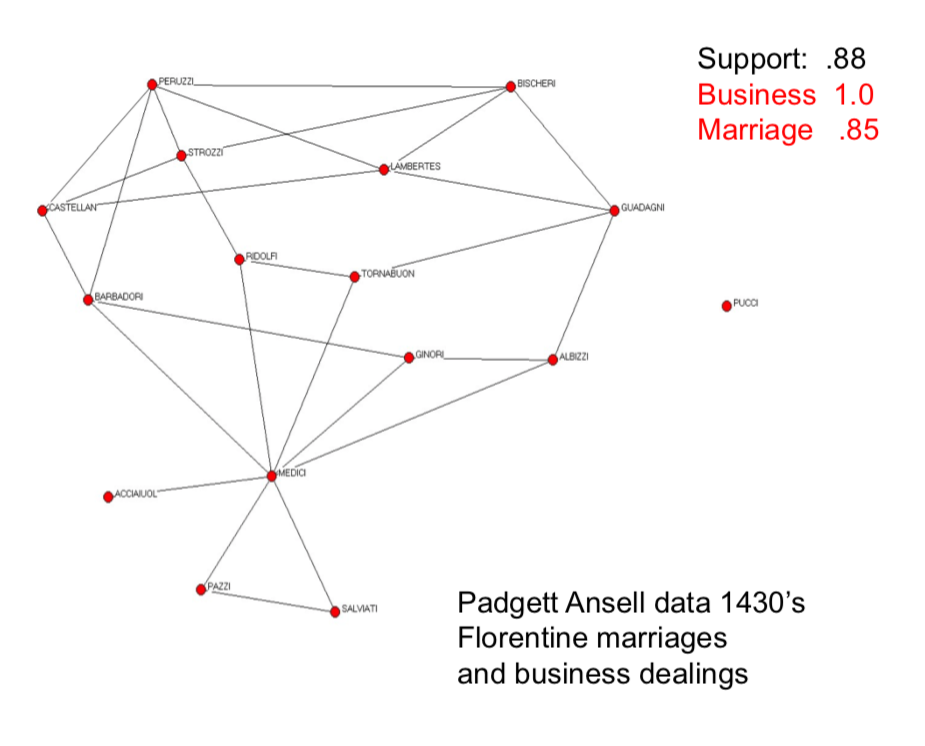 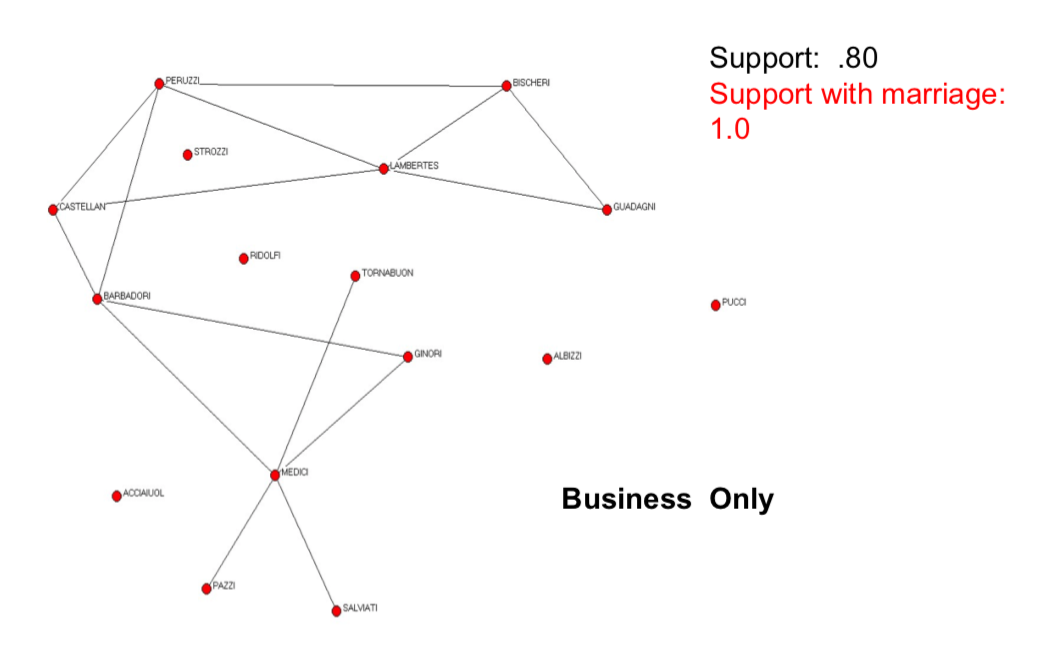 And so, you know, when you look at, at the support level of, just by businesses its actually 80%. But then, when you add in the marriages, it goes up to 100%, so the marriages are actually filling in to make sure that some of the business dealings are, have friends in common. So for instance, you know, here's a business relationship that doesn't have a friend in common in terms of business dealings, but then once you go back and fill in the marriage dealings, the marriages then you end up having a friend in common for these two, and so, you know, a node in common, Okay, conclusions this robust enforcement gives us what we call social quilts, we have these links that are supported on a local level. It gives us some theory for friends in common, which differs significantly from clustering.